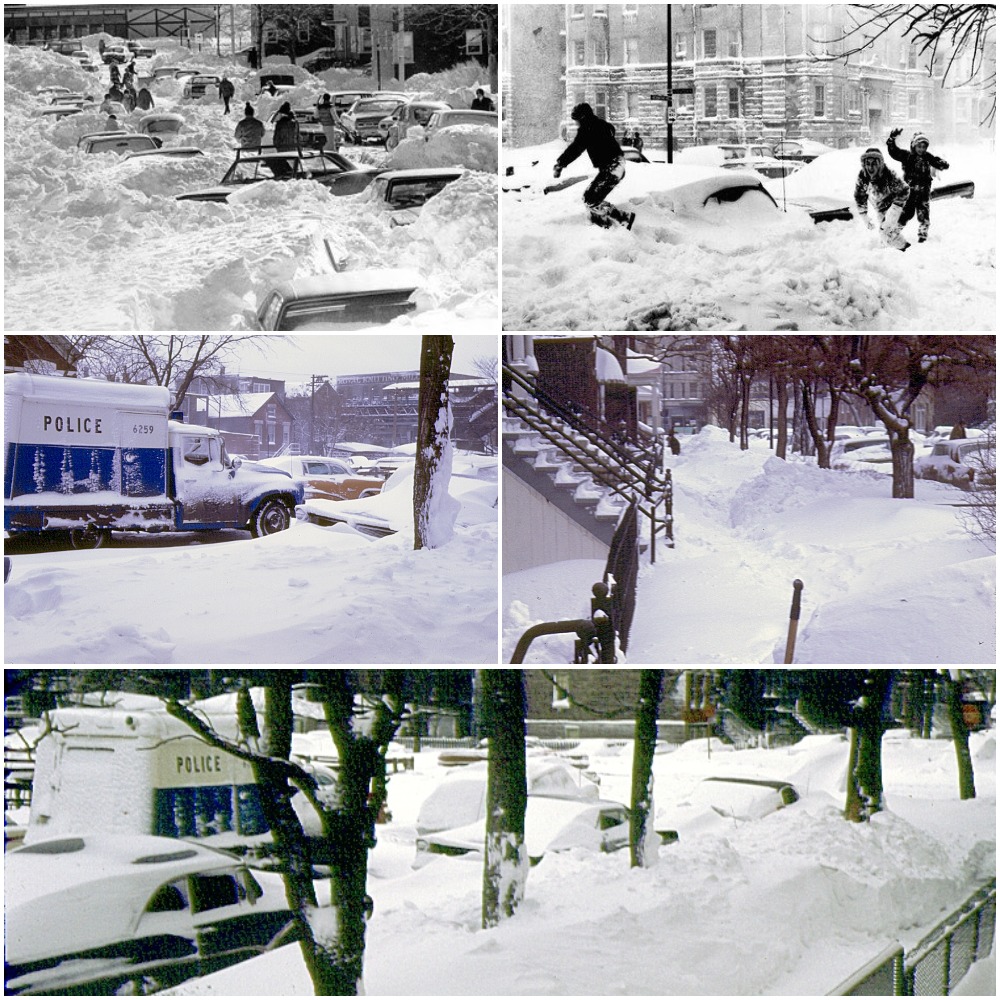 The following describes my experiences along with friends, family and acquaintances caught in the blizzard in 1967. What about you?

My Mother was so grateful we had just has the furnace filled with oil prior to the blizzard since oil trucks could not get through!”

Many wore professional mountain snow shoes to get through the streets.

It took my father what was usually a 15 minute ride from work in his car, two and a half hours to get home because the cars were not moving at all.

We played tackle football games a lot and my Mom sent me to the A&P pulling a sled to pick up groceries. The store shelves were pretty empty and I kept tipping the sled on the way home”

My friends Dad was stuck at his office for 2 days.” All he wanted to do was take a bath when he got home and sleep.”

“My aunt grabbed a bus after getting off the Illinois Central railroad. It was a long wait for the bus and when she finally got on, the bus only made it 2 blocks but couldn’t get past the snow drifts. She had to walk the rest of the way home.”

“I laid down in the snow; made snow angels and felt like owned the world.”

“Made over $40 dollars shoveling.”

“My Dad got stuck downtown and ended up hitching a ride home from a Chicago Police Officer.”

I was a newlywed of just 1 month — we were happily snowed in!

I was a Jr. in High School. I drove that day because I was taking finals. It took me over 3 hours to get home. Normally less than 20 minutes. My dad was furious with me…like I knew this was going to happen. School was closed for a whole week.

My Mom was really tiny and she got planted in the snow.  It took several neighbors to get her out.

The Blizzard of 1967 trapped people in cars and public transportation was nonexistent. Many had abandoned vehicles and walked to gas stations, churches and schools to spend Thursday night, January 26th.  By Friday, the city was a standstill. The snow had stopped at 10am with a total of 23 inches, the greatest snowfall in Chicago’s history.

In the city of Chicago 20,000 cars and 1,100 CTA buses were stranded in the snow. People walked to stores to clear the shelves of bread and mild.  Helicopters were used to deliver medical supplies to hospitals and food and blankets to those stranded. Expectant mothers were taken to hospitals by sled, bulldozer and snow plows. Looting became a problem on the west and south sides of the city. All houses were heated by oil added to the furnaces. Oil trucks could not get access to buildings.

Because of high winds, drifting could be over 10 feet in places which included front doors and garages. Many had died from trying to shovel the snow. For the first few days, children were sent to stores for supplies with sleds and snow shoes to pick up food. Many of the stores shelves were empty.

By Saturday the 28th, Chicago was beginning to dig out. The city sent a workforce of 2,500 people with 500 pieces of equipment and other states also sent heavy equipment to help with the snow removal. Snow was hauled and dumped into the Chicago river. O’Hare finally opened around midnight on Monday. Schools did not re-open until Tuesday.