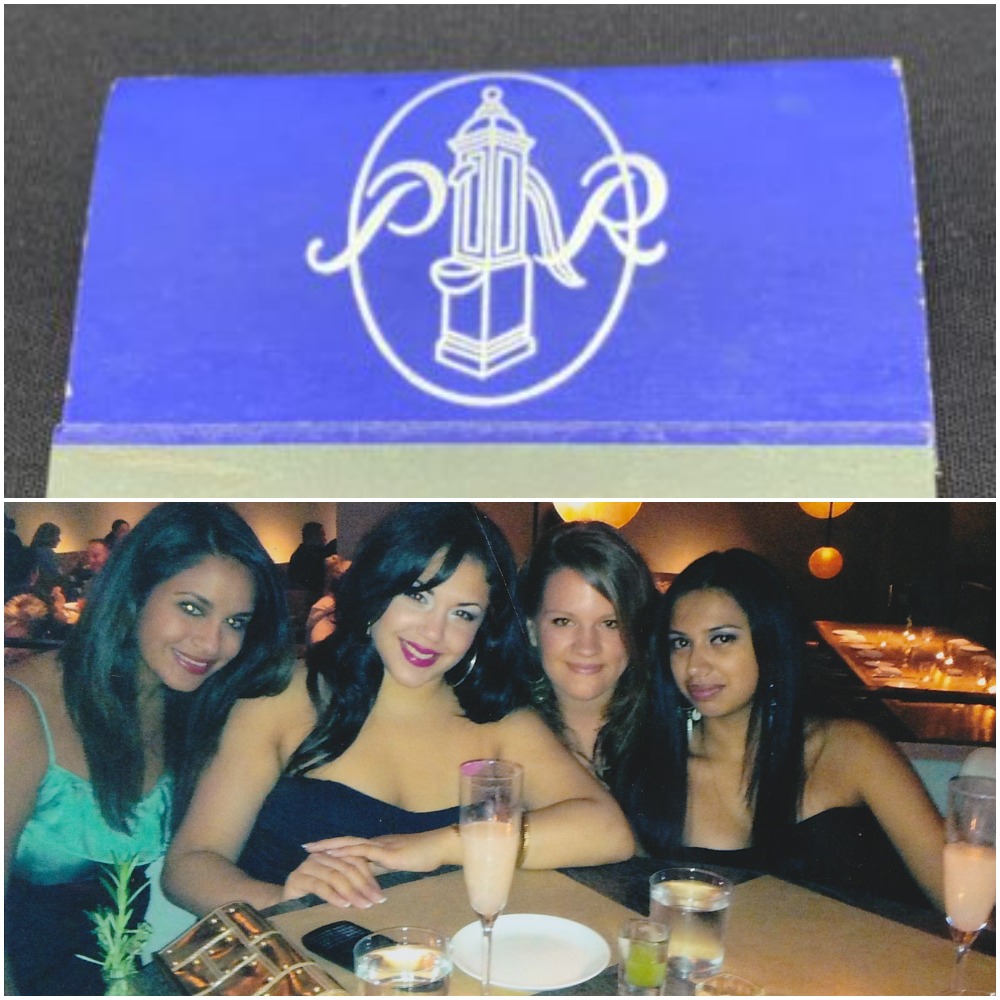 In my best dress, I barely remember eating in a beautiful booth with my Mom and Dad; one of my first Baby boomer childhood trips of elegance. In later years, I celebrated a friend from college’s birthday and excited about seeing the unexpected appearance of one of Charlie’s Angels; a TV series in the late 1970’s and Kate Jackson was her name from the program. My daughter also celebrated a friends birthday at the Pump Room in the 2000’s; bottom picture, my daughter, is second from the right. Dining at the Pump Room, opening on October 1st in 1938 and located at the famous Ambassador East Hotel in Chicago was a popular place for many celebrities who wanted to be seen such as Frank Sinatra, Elizabeth Taylor, Natalie Wood, and even Judy Garland and her children. It was the infamous booth number one where they would eat together. It always remained vacant until someone important arrived. The table actually had access to a rotary phone where they could make and receive calls. They could also unplug the phone from the wall if they wanted privacy.

Ernie Byfield created the restaurant based on the concept of the original Pump Room in Bath, England, where aristocrats would meet and wanted the same for celebrities visiting Chicago. It worked. Another area I remember is the hall leading to the restaurant that for over 50 years have shared the framed celebrity photos that fill the walls of the room’s entrance, lives that are gone for many. The Ambassador East was located on the northeast corner of State Parkway and Goethe Street in Chicago ‘s Gold Coast area and later was renamed. Until the 1950’s, train travel across the US was the only way and celebrities would have a special cross-country Pullman car switching at the LaSalle Street Station. Sometimes they would stay overnight but they did have a suite where they could freshen before returning to the train. Many stayed for lunch at the Pump room. Irv Kupcinet also talked about the Pump room and his celebrity interviews in his column for the Chicago Sun-times.

According to a wonderful article by Dr. Neil Gail, Saving Illinois History One Step At A Time, in 2010 real estate developer Ian Schrager—known for cofounding New York’s Studio 54—buys the Ambassador East for $25 million. In 2011, assets are auctioned off including the phone and is remodeled which reopens as Public Chicago. In 2016, Schrager sells Public Chicago to investors Shapack Partners and Gaw Capital for $61.5 million. In 2017, the hotel is renamed Ambassador Chicago. Rich Melman’s restaurant group, which formerly owned the Pump Room, returns to manage the space and renames it Booth One. After a remodel, the team installs a rotary phone at the famed table. The actually operated the Pump Room from 1976-1998.

The Pump Room went through many changes before finally closing in 2019. Ebay offers some great items of the historic Pump room including a variety of match covers, boxes and menus.

In 1925, Americans felt secure in the promise of continuing prosperity. Uncle Sam is boldly standing on the Peak of Prosperity waving a banner proclaiming, “Highest Living Standard in the World” in a 1925 political cartoon. The Chicago Tribune’s slogan, The World’s Greatest Newspaper spread the influence of Chicago style living.  Andrew and William Karzas in 1926 built a lavish Spanish castle style ballroom complete with stars and clouds moving across the ceiling.  Alcohol was prohibited, crowd control was maintained by “chaperones” and a strict dress code was enforced.  Classy, glamorous entertainment with live band performances, in Uptown near the “L” propelled the Aragon Ballroom into an instant success.

Wayne King played his saxophone and led his band featuring all the favorite love songs with waltz and fox trot rhythms.  He started recording with RCA/Victor in 1929. In a ballroom that could hold thousands, Wayne King sold millions of his records.  During the 1930-40’s decades romance ruled the dance floor;  song titles such as “I’ve Got You Under My Skin” – Cole Porter, “Smoke Gets in Your Eyes” – Jerome Kern ,“Night and Day” – Cole Porter , “My Funny Valentine” – Rodgers and Hart,  “How Deep is the Ocean” – Irving Berlin .  Recorded in 2014 by Barbara Streisand and Michael Boule, a favorite of mine from this time period, “It Had To Be You”.

Radio was the main vehicle to transmit information and entertainment.  Chicago’s own WGN owned by the Tribune featured live broadcasts from the Aragon Ballroom since 1927. Not only were there stars twinkling in the ceiling but many star performers graced the Aragon Ballroom. In 1958, a fire next door to the Aragon closed it down for about 6 months.  When the Ballroom opened its doors again, dance styles and formality were changing. By 1964, the swanky ballroom dance era was over.  Top Hits from 1965 showcased The Beatles singing “Ticket to Ride”, “Help”, The Rolling Stones groaning about “Satisfaction” and the McCoy’s belting out, “Snoopy Hang On” introduced new styles of music entertainment. .

The Aragon hung on trying different venues such as wrestling, roller-skating and disco. Rock concerts lasting for 6 hours were held during the 1970’s.  Zack Snyder‘s Batman v Superman: Dawn of Justice was filmed in 2015.  Eventually the new ownership in the 1970’s linked up with the promoters of Jam Productions. Currently, Aragon has hosted over 1,000 rock concerts in the last few years.  A picture of these events testifies to the ongoing popularity of entertainment.  In August 2019, the Chicago Sun-Times announced Byline Bank sponsors the Aragon, offering a full concert schedule of events that will start performing when COVID-19 restrictions are lifted.