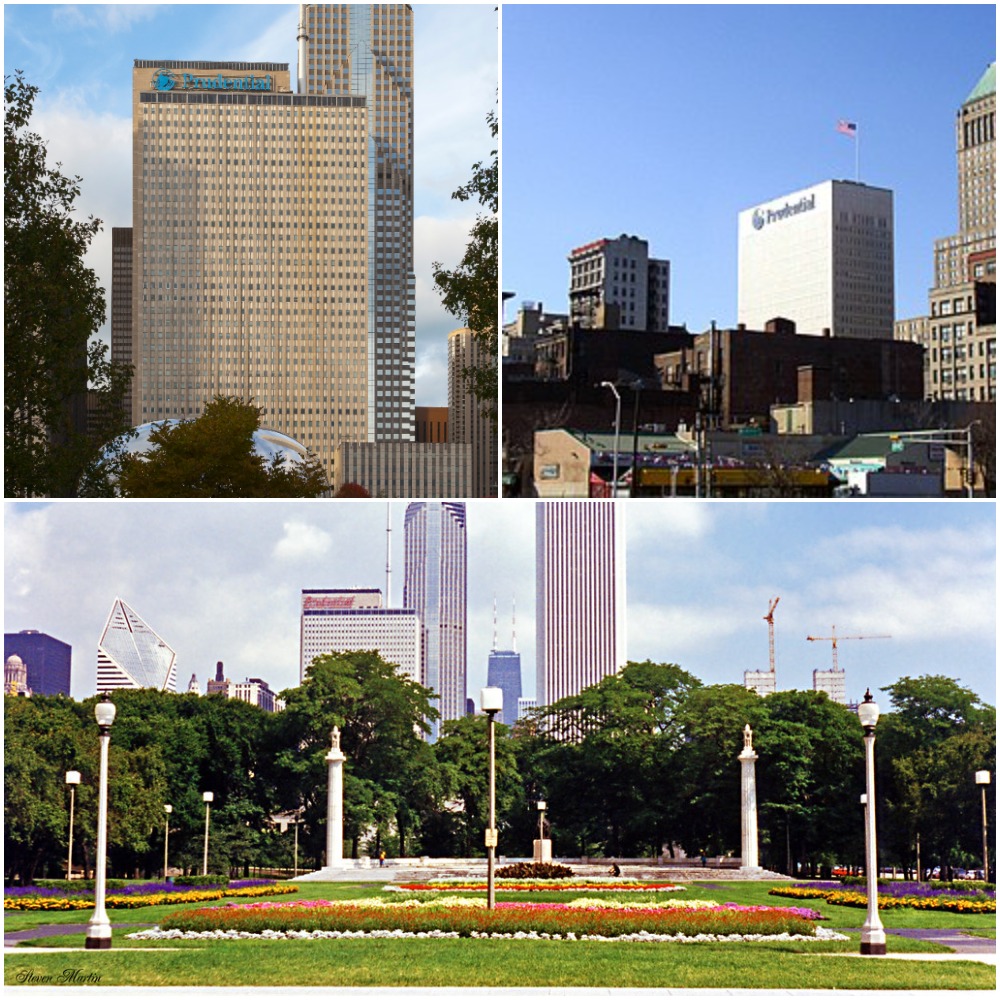 Who remembers when the Prudential Building was the tallest building in Chicago? I went with my family, parking in the new underground parking lot and was terrified the windows would cave in. I remember my Mom putting money in a telescope dispenser where we could view the skyline and other buildings, much, much, closer. The Prudential was actually the same age as me and I was only five when I saw it for the first time….both of us born in 1955; a 41-story structure which was the headquarters for Prudential’s Mid-America company. Some visited the new Stouffers restaurant in the building after viewing Chicago’s skyline. I remember going on another trip with my girl scout troop and eating at Wimpy’s Grill on Clark Street, another Chicago beginning opening in 1934 with the best burgers. The spire on top represented WGN.

According to Connecting the Windy City, the first tenant to move into the building, the western advertising offices of Readers’ Digest magazine, settled into its space in September of 1955, taking up temporary space on the third floor before moving up to the nineteenth floor in the spring of 1956.

The structure was the first new downtown skyscraper constructed in Chicago since the Field Building, 21 years earlier and was built on air rights over the Illinois Central Railroad. It was the last building ever connected to the Chicago Tunnel Company’s tunnel network. It became One Prudential Plaza when a second building was built in 1990. Completed in 1972, the simple, rectangular-shaped, tubular steel-framed structure was originally called the Standard Oil Building and now Aon which is much taller than the Prudential. Actually, the Board of Trade building built in 1930 was taller and had an observation deck but as Baby Boomer children most of us were told that the Prudential was the tallest, maybe because it was new and located by the lake with the best views. It was the tallest skyscraper built in the 1950’s.

Then it became Two Prudential Plaza which was 64 floors. In 2006, Bentley Forbes purchased One Prudential and the property next door but went into default due to the recession. In 2015, New York companies bought in though Bentley Forbes still has interest in ownership. 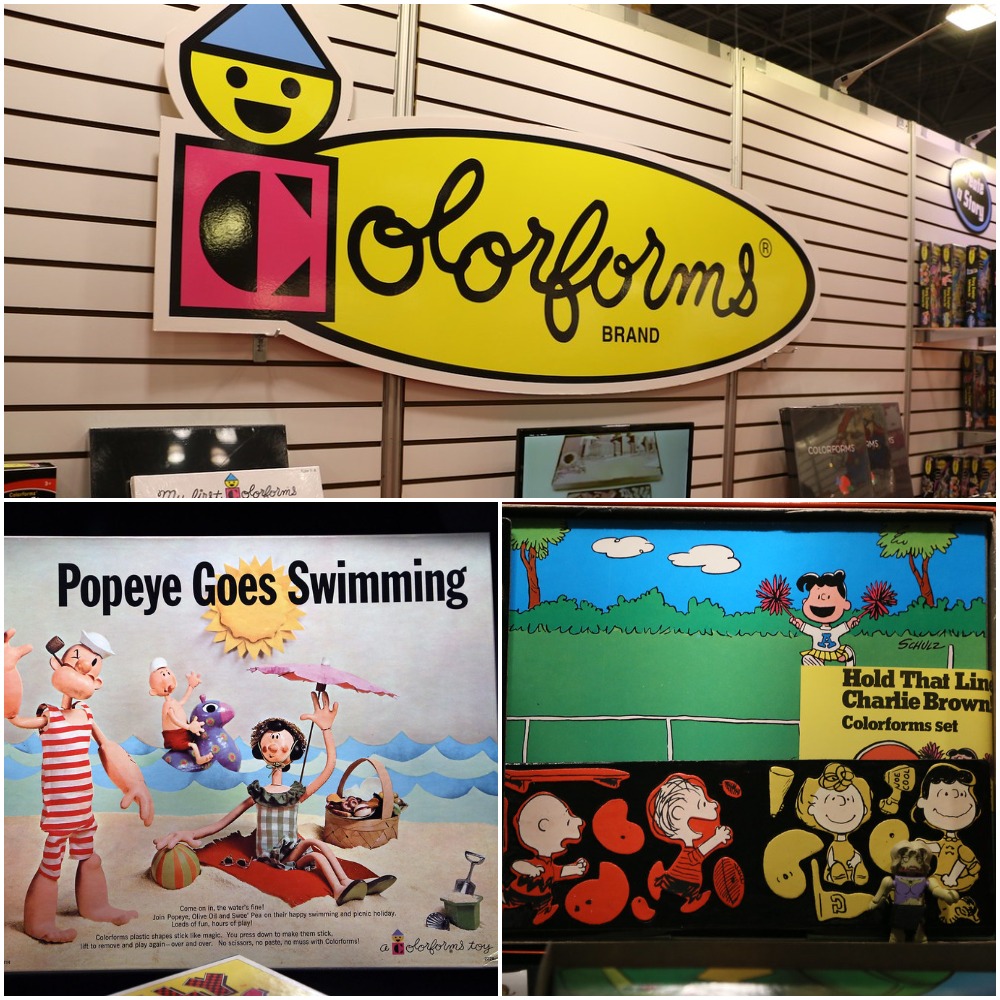 When assisting in kindergarten in past years, the kids would share their version of colorforms with me knowing it was my favorite game to play as a child myself. But just last week I walked into a kid’s store and there they were…the original colorforms…dressing up for the weather just like when I was kid in the 1960’s but modernized. I also remember dressing up Tammy, the Beatles in 1964 and for the boys they gravitated to Batman and Scooby Do. In the 1990’s, my son enjoyed Colorfoms when he wanted to play Teenage Mutant Ninja Turtles or Curious George. Colorforms is easy with shapes cut from vinyl and can cling to a smooth background making your own special design. Colorforms is one of the most loved and respected toys beginning with the couple Harry and Patricia Kislevitz in 1951.

In the 2000’s, though Internet use boomed, Colorforms came alive with Harry Potter, Sponge Bob, Dora the Explorer and the Hungry Caterpillar. In 2011, Time magazine awarded Colorforms as the toy of all time. In 2014, Out of the Blue Enterprise acquired Colorforms. Billions of sets have been sold and Colorforms continues to make the best plastic creative toys, and I continue to gravitate towards any student who is playing with a set. I can’t wait to play. 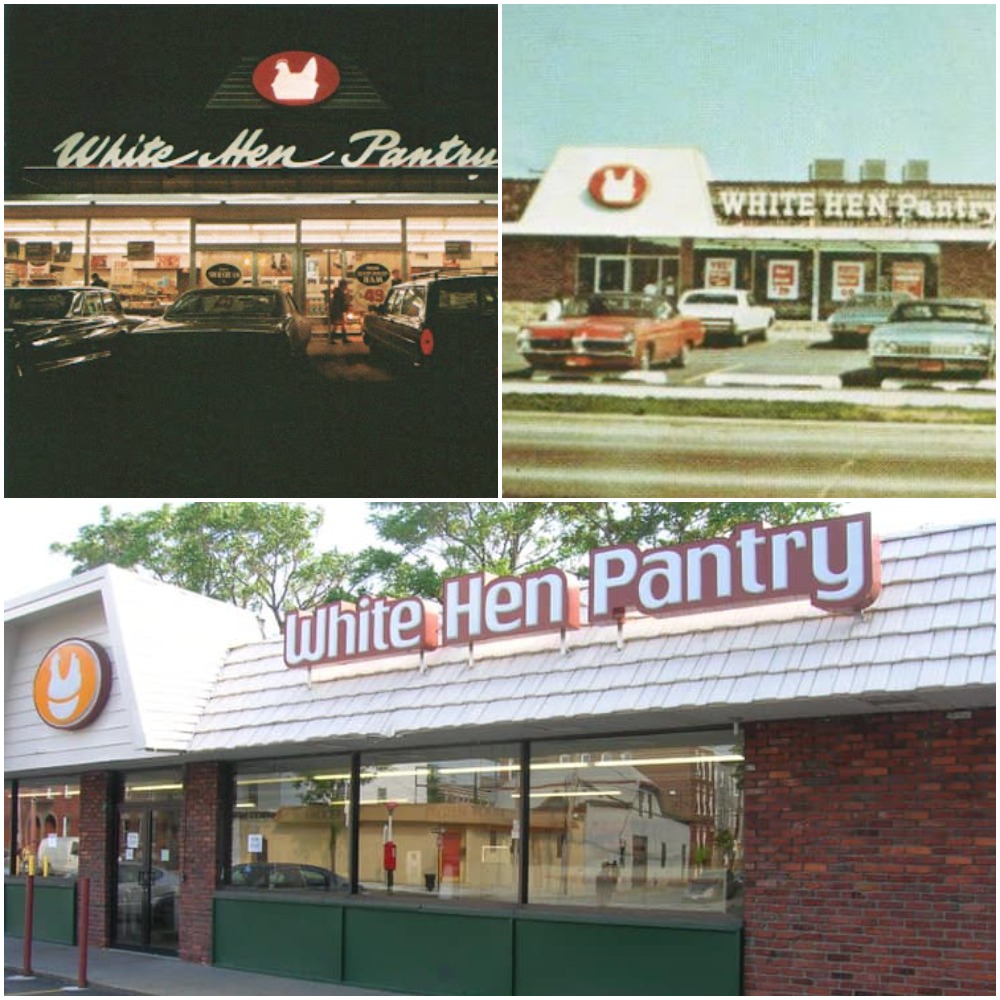 There was a White Hen right by my high school in the 1970’s which was Thornridge in Dolton and my mother bought her cigarettes there. But my true memories of the White Hen was for coffee in Downers Grove when my children were little in the 1990’s. My daughter was so excited to win a coloring contest and her prize was a giant stocking with treats for Christmas. And they both loved the jingle...When you come out.. come out to White Hen. White Hen Pantry was founded by Jewel and opened their first stores in 1965 which included Mount Prospect, Glen Ellyn, Bensenville and Elmhurst. Headquarters was in Lombard and they opened approximately 260 stores. Open for 24 hours with good sandwiches and great coffee. Many used the ATM there, and I did not know that White Hen was the largest ticket lottery vendor for Illinois.

White Hen was sold in 1984 and became its own company. Stores were located in New Hampshire, Boston, southern Wisconsin, northwest Indiana and central Illinois. Over 260 plus stores were created. In 2001, White Hen was purchased by Clark Retail Enterprises and most of the stores, which included about 50, were sold in the New Hampshire/Massachusetts area.

In 2005, White Hen began to push its’ deli foods as well as where it offered free samples of its private label Pantry Select Chips at an August baseball game for the Chicago Cubs and also opened the store of the future in Wicker Park in April, 2006. However, White Hen was sold later that year in August of 2006 to the company owning 7-11 Stores acquiring more than 200 stores in the Chicago area and Northwest Indiana. In 2007, some stores were being converted to 7-11 stores and, eventually, White Hen’s faded away. A final store closing took place in Boston sometime in 2013. 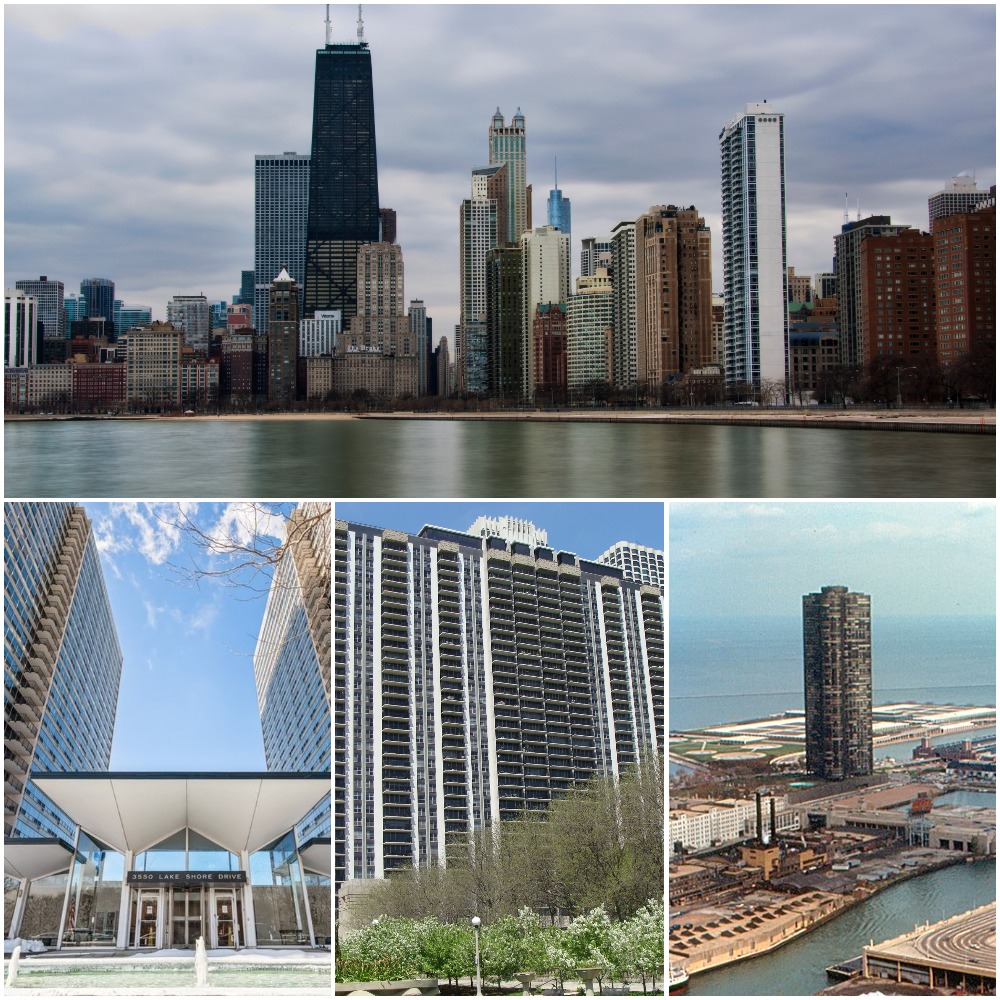 As a Baby Boomer lifer in Chicago and the suburbs when I graduated college from Lewis University, I had picked out 3550 Lakeshore Drive where I would live. I ended up moving much further north in Gurnee for my first teaching job. But that’s what we did back in the 1970’s/1980’s after high school or college. We picked out our Lakeshore Drive home. Where did you want to live then or even now? As a young child, it was Outer Drive East built in 1963 with the geoplastic covered pool. My mother wanted luxurious Lake Point Towers. A friend lived at 900/ 910 Lake Shore Drive in the 1980’s. Now, I can’t begin to find Outer Drive East since so many new buildings tower above it.

According to sources, Lake Shore Drive’s origins date back to Potter Palmer, who coerced the city to build the street adjacent to his lakefront property to enhance its value. Palmer built his “castle” at 1350 N. Lake Shore Drive in 1882. The drive was originally intended for leisurely strolls for the wealthy in their carriages, but when bringing on the auto industry, that changed quickly.

The condos at 3550 Lakeshore Drive are pretty popular still with a store and exercise room and children would attend Lakeview schools. 400 East Randolph Street Condominiums or simply 400 East Randolph is a 40-story high-rise in Chicago and considered Outer Drive East. It was the first high-rise residence constructed on the east side of Lake Shore drive, in an area that has become The New Eastside. You can buy or rent as small as a studio. Other amenities for 400 East Randolph residents included a full service restaurant and bar, beauty salon, dry cleaners, convenience store, 1000 book lending library and 2000 sqft hospitality room with catering kitchen.

At the time of its completion in 1968, the 645-foot tall Lake Point Tower was the tallest apartment building in the world. You may rent or own a condo…generally renting a three bedroom for about 5,000 a month. Definitely a city within a city with many shops and services with a four lane heated swimming pool and state- of-the-art fitness center including a racquetball and handball court. 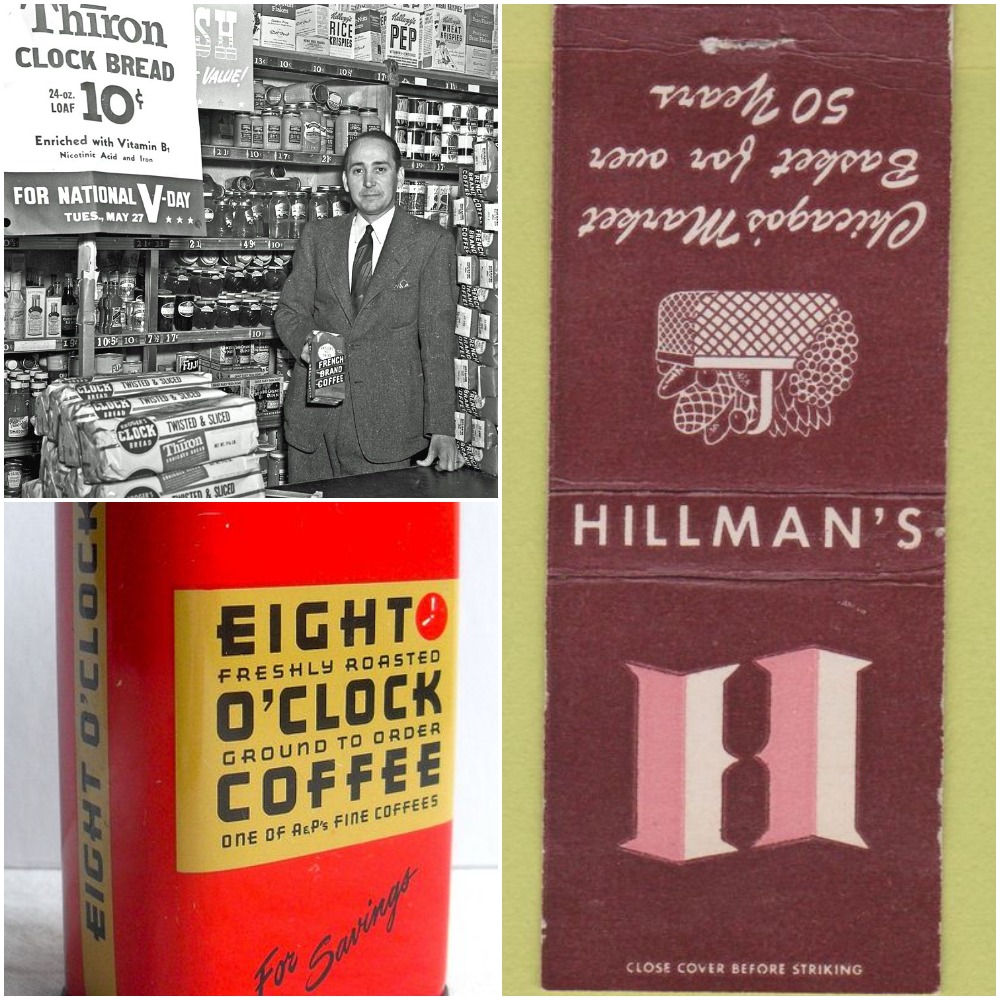 My mother’s all time favorite grocery store was Hillman’s that in the 1960’s was located on 95th and Jeffrey Street on the southside of Chicago. Quite a beautiful store, clean and known for it’s bakery. In the early 60’s Hillman’s operated 14 supermarkets throughout Chicago and suburbs opening for business in the 1950’s. Not far from Hillman’s was The Great Atlantic and Pacific Tea Company (A&P) who established its first branch in Chicago just after the fire of 1871. Mom did not like A & P as much as Hillman’s though she didn’t mind the Eight O’Clock coffee manufactured at The Great Atlantic & Pacific Tea Company. She also collected their plaid stamps which we still have. Hillman’s went out of business in 1983.

A&P was founded in New York City in 1859 with a focus on tea. In 1912, A&P introduced its “economy stores,” which sold a full line of groceries at low prices but mega supermarkets really took off in the 1930’s. A&P also circumvented wholesalers by buying in bulk from manufacturers and purchasing facilities where they produced their own store brands. Chicago’s large chain store companies, National Tea, A&P, and Kroger, acquired hundreds of stores during the 1920s. In 1930, A&P reached 2 billion in sales with over 16,000 stores becoming one of the largest retailer in the world.

In the 1970’s, the store really declined further not focusing on market changes. Customers wanted specialized stores focusing on improving health such as Whole Foods and Trader Joe’s. Walmart and Target were also creating competition by establishing a grocery section in their stores. A&P did gain some popularity in the 1980’s by redesigning outdated stores but it wouldn’t last. In 2010, the store filed for bankruptcy, Chapter 11, coming out of it in 2012 as a private company. Some profits were obtained in 2013 and 2014 but was looking for a buyer that it never found. Again, more loss happened in 2015 and second Chapter 11 was declared. This closed all stores permanently.

In 2003, A&P spun off the Eight O’Clock Coffee brand to Gryphon Investors, a private equity firm based in San Francisco, California, which used the brand to create the Eight O’Clock Coffee Company. The company has been re-vamped and still serves the best coffee with a variety of flavors. Original 1960’s coffee cans that were actually tin advertising banks are available on Ebay. A Hillmans Grocery matchbook cover is also available on Ebay. 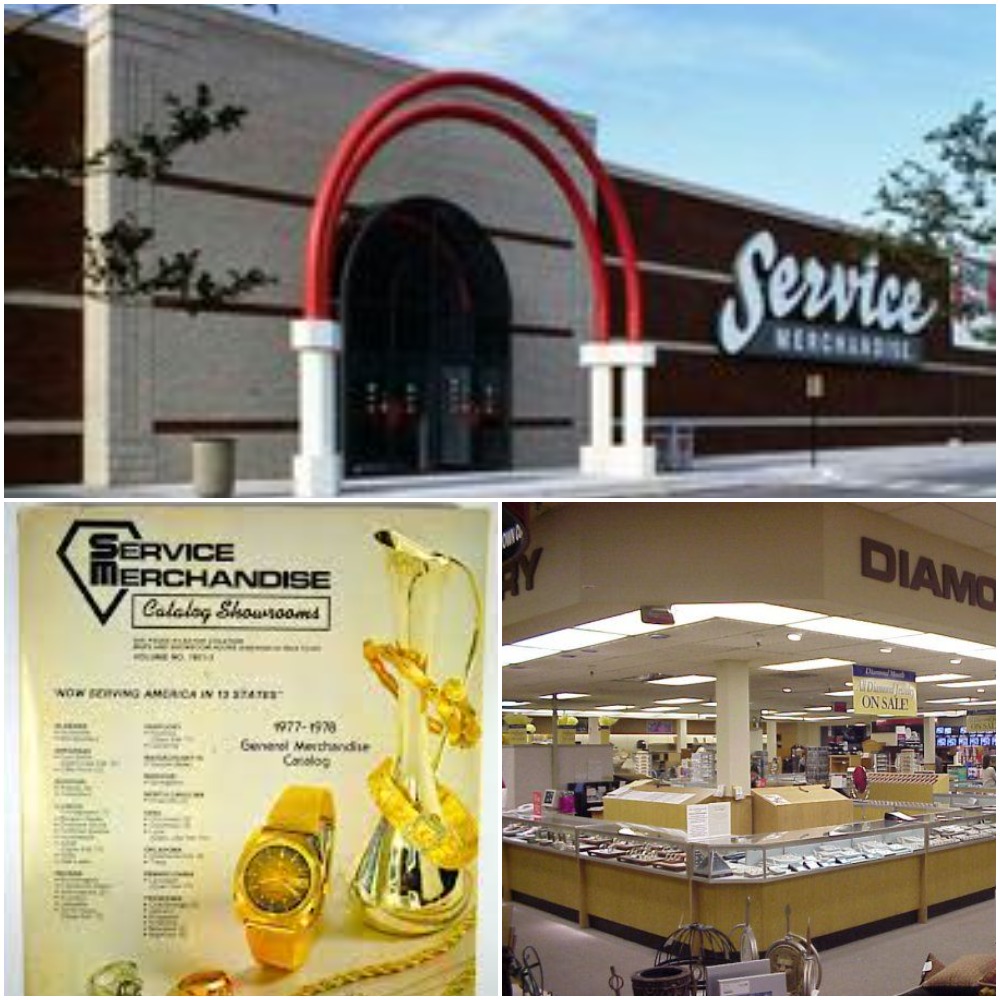 On a vacation break watching Buzzer TV, I happened to watch a few of the Concentration Game Shows with Alex Trebek in the 1980’s and you could win a beautiful diamond necklace from Service Merchandise. I did not know diamonds were part of their catalog showroom. Lucille Ball was a regular advertising the jewelry from Service Merchandise on commercials; including many other stars. The Chicagoland area had 24 stores. My first experience was at Lakehurst Mall in Waukegan in the 1980’s where I bought a phone answering machine! They were located in Orland, Berwyn, Deerfield to name just a few. Originally opening in 1934 as a small five and dime then became a catalogue showroom 1960 in Nashville founded by Harry and Mary Zimmerman. Service Merchandise was also a prominent sponsor of Wheel of Fortune.

In the mid 1990s, the hand-filled paper forms were replaced with barcoded pull tags placed on/near each item in the showroom. For non-jewelry orders, customers would enter the showroom and receive a carbon-paper order form and clipboard to record the catalog numbers of desired items. The jewelry department was in the center of the store operating on a first come basis. Items were displayed in working order in the showroom, allowing customers to test products as they shopped.

This was changed in the late 1980’s with computer kiosks and changed again in the 1990’s where there was touch screen servers. However, a recession would slow business even further. Places like Circuit City and Best Buy began to take over as well discount options which included Walmart and Target.

They also tried drive through windows but that didn’t work finally closing the largest catalog retail empire in 2001 due to bankruptcy and disappearing catalog business. It had reached its peak in 1994 with over 4 billion in sales.