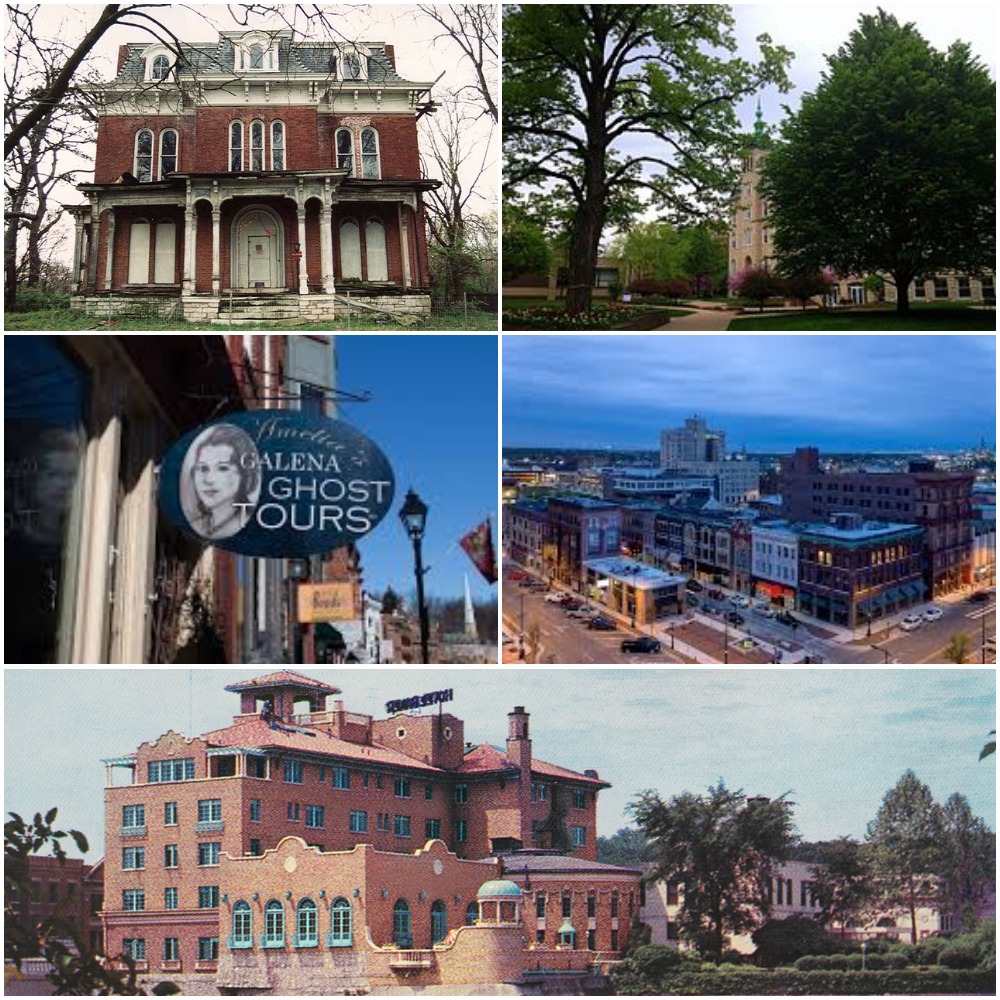 Alton: The city is actually considered the one of the most haunted towns in America according to Meeting of the Great Rivers. Alton is located on the banks of the Mississippi River and visitors including hunters have seen orbs of light in various places throughout the town. Through the years, many travelers have investigated and inquired about the unexplained happenings and psychic phenomena found throughout Alton.  Several locations that are noted to be extremely haunted, including the infamous McPike Mansion, The First Unitarian Church, and Milton School, have been featured on television shows on the Travel Channel and Syfy Channel. Alton tours is offered by Alton Haunting and tickets are on sale.

Naperville: Naperville has been known as one of the best cities in the US to live but according to Mysterious Heartland, one of the most haunted. A massive train wreck took place in 1946 where two passenger trains collided. Forty seven people were killed and one hundred and twenty five were injured. Many still ghosts or shadows walking on Loomis Street. Buildings at North Central College are also haunted as well as ghosts sited at the Naperville cemetary. Check out Naperville ghost Charlie Yellow Boots who walk the streets and the historic streets are supposedly EMF active.  Naperville Ghosts provides an interesting tour with Kevin Frantz who has also written two books about the Naperville Ghosts and actual encounters.

Galena: Ghost stories have been circulating since 1880 and according to Visit Galena, were actually written in local newspapers back then. The Lady in Black is said to haunt the DeSoto House in downtown Galena and one guest actually has a photograph of her. There has been many natural disasters in the valley but a great deal of historic preservation in Galena which tends to bring on the spirits according to many. Embe Eatery and Lounge has witnessed flying objects and the library at Ryan Mansion is something very strange for those looking for ghosts. Amelia Ghost Tours offer a great evening along with dinner theatre tickets available. Matthews Haunted Pub Crawl leads those to three historic pubs to visit ghosts located in downtown Galena. Ghost equipment is used on both tours.

Decatur: There are many stories of hauntings in Decatur, but few that have received as much attention in the general public at the time of their appearances as the “black ghost,” which there are reports of as far back as 1880 according to the Herald Review. Just south of the main highway in Decatur is the Greenwood Cemetary where people have a young woman crying on a set of stairs and orbs of light. Or visit Avon Theatre which has also been known to have spooky encounters. During the 1920’s, Decatur was known for bootlegging, gambling, prostitution, murder bringing violence which many felt contributed to spiritual drama.  Like Alton Tours, the same company runs the tours called Haunted Decatur.

St Charles: Hotel Baker is a hot spot for ghosts since sources claim that a chamber maid killed herself in the Fox River though there are no records of the suicide. Created in 1928, Hotel Baker was an elegant hotel that included the Rainbow Room, a two-story ballroom encircled by columns that featured a dancing floor and famous entertainers such as Louis Armstrong, Tommy Dorsey, Guy Lombardo and Lawrence Welk. Since the hotel has been restored, it continues to be a choice of luxury. And the Arcadia Theatre in downtown St Charles is another haunted building where the lights go on and off. The Dunham-Hunt Museum is supposedly by Jane Dunham who is believed to have lost some of her personal items while the house operated as a museum. St Charles Ghost Tours is the place to contact for an amazing history.