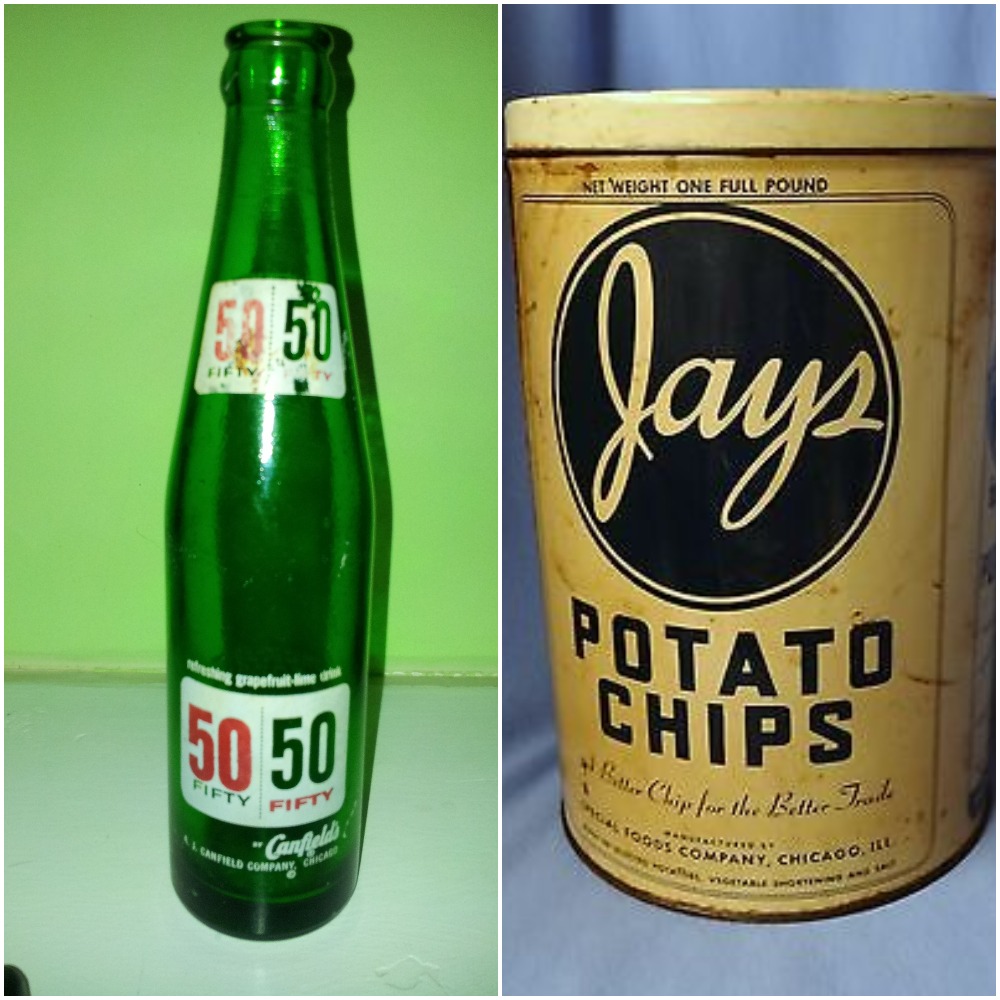 I googled his shop, my fathers, Glass Sales and Service shop, at 6755 South Chicago Avenue. It looked like it had been torn down. But across the street the decrepit remains of Canfield Soda still stood; a company that also progressed along with my Dad. Though I am not sure the details, my Dad did business with AJ canfield back in day always bringing home free cans of 50/50/ a mixture of grape and lime.

Many were introduced to soda by drinking ginger ale, inspired from Canada, and 50/50. The older Canfield was a railroad worker, prior to beginning the company in 1927, with his son who was known as AJ. AJ was 25 years old when he took over the company and they expanded to another facility at 89th street in Chicago. Canfield’s Chocolate Diet Fudge soda was created in 1972 and sold over 200 million cans. In 1995, the A.J. Canfield Company was sold though you can still purchase both sodas at Marianos. AJ passed away at the age of 84 in 2000.

Jays Foods was also founded in 1927 with the beginnings of Leonard Japp Sr selling pretzels from his truck. Eugenia, Mrs Japp, had a potato chip recipe and Leonard along with a partner began selling Mrs. Japps Potato Chips. However, after World War II, that was changed since the name Jap created a negative connotation. The chips were changed to Jays Potato Chips while the company became Jays Foods. Jays was sold to Borden but acquired back to the Japp family in 1994 and sold again to a Chicago equity firm and another snack company. Finally, the company filed bankruptcy in 2007 and the Chicago plant was closed but Snyder’s-Lance continues to manufacture and distribute the product.

Japp died in 2000 at ninety-six and according to South Side Weekly, Al Capone encouraged Japp to open factories and mass produce his snacks. My father commented that the mob, during the 1930’s, truly stepped in to help small, creative business starting out in Chicago after the depression. I think he did some work for them though he would never share.

The chips were produced by state of the art machines at the plant on 99th Street and Cottage Grove, opened in the mid 1950s. According to Made in Chicago Museum, Japp offered profit sharing to employees, daily lunches and even served lunches to neighborhood kids.

Most grocery stores still stock Jays and Canfields, but are they the same? Canfield bottles compared to cans? Jays was actually sold in large tins in the fifties and today you can buy vintage potato chip tins of all types on Ebay….including Jays. Or trade yours in for a price.

I was never a consistent lover of soda or potato chips over the years but if it was a home grown Chicago business, you had to buy and love them.