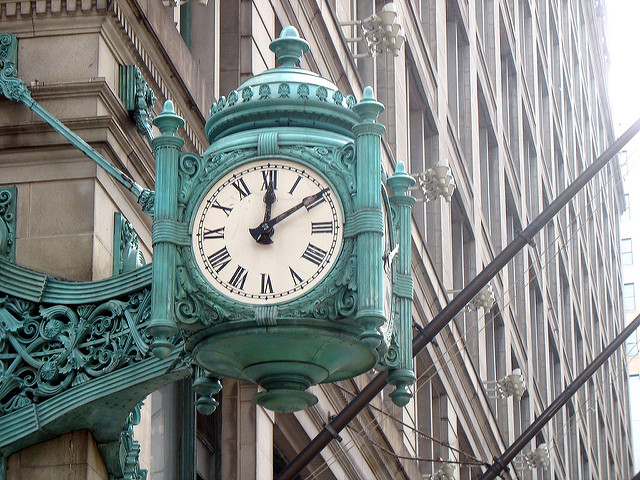 The first clock went up in 1897 at State and Washington while the second was added in 1907 at State and Randolph. It did receive a new paint job in 2015 according to ABC news.  and still keeps time.

Being a lifetime resident for many years, Chicago has magnificently celebrated the winter holidays with amazing, timeless displays at the building behind the clock that have become well-known throughout the country.

I continue to meet people today who talk of the same tradition that they had experienced as children, parents, grandparents and even great grandparents. The Marshall Fields store on State Street that began in 1870 and renamed Macy’s in 2009 have kicked off the most treasured memories for family and friends.

During the 1960’s, it began for me in a car driven by Mom accompanied by my best friend and her Mother. Of course, we were dressed in our finest, sometimes with hats and matching gloves, but always in dresses. We parked in what was known as the Underground Parking Lot on Michigan Avenue though many took the Illinois Central to walk a short distance to Marshall Fields Department Store. And there it began before we even entered the massive 8 story building.

The store had designed animated windows that told a story and so we would begin our trip around the building to see each breathtaking display. In 1946, Marshall Field’s created Uncle Mistletoe that became so popular, it was a local television show for awhile and we would watch his adventures in one window after another. Finally, generally cold and hungry, we made our way to the 7th floor to the beloved Walnut Room established in 1907 with beautiful paneling, seating 600 guests around a phenomenal Christmas Tree always stretching our necks to see if Uncle Mistletoe graced the top of the tree.

In the early 1990’s, I took my little ones to the Walnut Room as well but they seemed more impressed in the pagers signaling when a table was available.

The Walnut Room at Macy’s can still be enjoyed for the holidays. Macy’s on State Street still offers holiday windows and lunches around their Christmas tree though weekdays are the best for wait times. Holiday shoppers will receive a pager so they can still shop while waiting for a table. A breakfast buffet is also served through the holiday season. Relive your childhood or start a new tradition with your children and after lunch, visit Santa on the fifth floor. See if Uncle Mistletoe is still on top of the Great Tree.