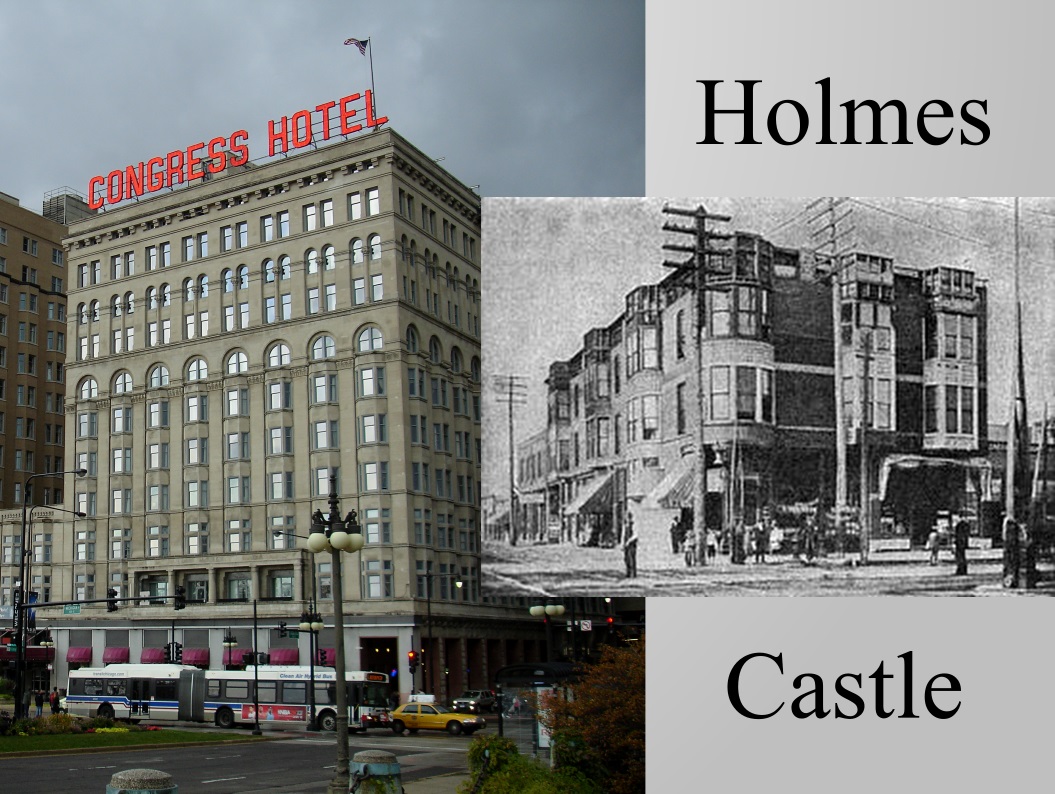 What’s great about the Congress Hotel, one of the most haunted in Chicago, is you can go there, rent a room and stay the night.  Rates for rooms are not outrageous and you can spend as much time as you want to catch pictures of ghosts. They actually host a Haunted Halloween Ball at the Congress at 520 Michigan Avenue.

Originally constructed in 1893, the Congress Plaza Hotel featured cobbled streets, gaslights, and horse drawn carriages. The hotel was originally called the Auditorium Annex when it opened to house the throngs of visitors to the World’s Colombian Exposition.

Many famous people and presidents have stayed at the Congress which include Grover Cleveland, Teddy Roosevelt, and Franklin Roosevelt. And the most visible ghosts include Peg Leg Johnny who was murdered, a workman who was buried behind the walls in the balcony of the glorious Gold Room. The Gold Room and Florentine Room are still beautiful spots for special occasion parties and weddings.

The six floor has been known to have some strange experiences as well as the 12th floor where a mother and her children committed suicide throwing themselves out a window. Staff have claimed that one room is so dangerously haunted…they had to seal the room and no one will go near it.  Supposedly, one of the most haunted rooms of all is 441 and remember, it is not locked forever….you can stay there.

Another bizarre story at the Congress is that of the ghost, Dr. Henry H. Holmes who wanders the hallways looking for woman to to enrapture in his arms and murder at his Murder Castle. His real name was Herman Mudgett, Chicago’s first serial murderer, who went to work in a drugstore owned by Dr. E.S. Holton, in Englewood, a suburb of Chicago that is now part of the city.

And it was here Holmes would draw in young woman and visitors from the Fair. Missing woman were reported and some have said that Holmes had killed 27 women and other reports include even more even though there is no conclusive evidence of how many he killed. In July 1895, Chicago police and reporters began investigating Holmes’ building in Englewood, now locally referred to as “The Castle”. Though many sensational claims were made, no evidence was found which could have convicted Holmes in Chicago.

According to Exploring Illinois, Holmes, who graduated from the University of Michigan Medical School, had already racked up a fairly impressive resume of fraud, forgery and petty theft by this time, including, while still a med student, taking out insurance policies on cadavers he stole from the school. Holmes, though, was a hard worker at the drugstore and eventually bought it.

Holmes purchased an empty lot across from the drugstore, where construction began in 1887 for a two story mixed-use building, with apartments on the second floor and retail spaces, including a new drugstore,on the first. When Holmes declined to pay the architects or the steel company, Aetna Iron and Steel, they sued in 1888.[5]

In October 1895, Holmes was put on trial for the murder of Benjamin Pitezel, and was found guilty and sentenced to death. By then, it was evident that Holmes had also murdered the Pitezel children according to a Philadephia detective who found the children and had followed Holmes.

What was the murder castle like? According to Prairie Ghosts, the second floor however, proved to be a labyrinth of narrow, winding passages with doors that opened to brick walls, hidden stairways, concealed doors, blind hallways, secret panels, hidden passages and a clandestine vault that was only a big enough for a person to stand in. The room was alleged to be a homemade “gas chamber”, equipped with a chute that would carry a body directly into the basement. The basement was a chamber of death with devises and materials that indicated torture and murder.

The murder castle is no longer there and a post office remains in its original location but the story is well-documented in Erik Larsen’s, Devil in the White City and Leonardo Di Caprio plays Holmes in the movie. However, staff at the post office have seen strange sightings in the basement.