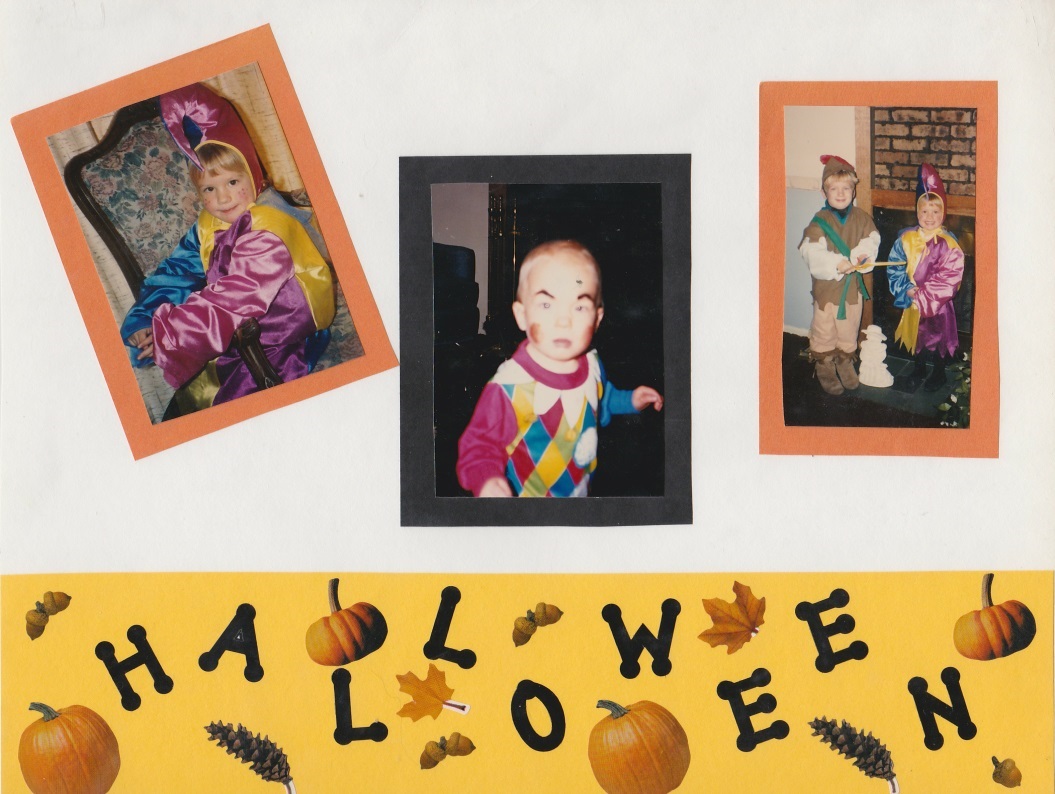 For me, it began when my son was only two and hated being a clown. That’s because the face Mom had painted on his delicate skin was way too scary for Halloween. He scared himself when he looked in the mirror and trick or treating was just out of the question. Mom’s first costume attempt was not too good and thought he would forever be damaged by a poor holiday experience. But it did get better when the following year he liked being a beggar, carrying his stick of wrapped clothes in a scarf though when I think about it, maybe that wasn’t a good choice either.

As a child, I loved autumn with the breathtaking color of the season, pressing leaves in scrapbooks, spending hours selecting a costume and, of course, carving a pumpkin with, for me, Dad. It was his job to cut but I scrapped away the innards. The only time I liked kitchen duty. And I remember being a gypsy, Little Bo Peep with a crooked staff that eventually gave way to the wind on Halloween, and a date girl wearing a beautiful wide skirt with mini calendars attached. Among the many dressed as Super Man, witches, Bat girl, Sleeping Beauty and Minnie Mouse, cowboys and Indians, and of course, Casper, with silly masks to match our attire back in the 1960s. Dressed in a white sheet or a Frankenstein mask was about the extent of what was scary. Maybe a devil took you by surprise as well.

And the neighborhood was packed with children trick or treating; knowing the adults that answered their doors. If we didn’t have an appropriate trick or treat bag, a pillow case would do and besides the candy bars, suckers and bazooka gum with comics, we would get even more like a popcorn ball. Sometimes we would worry about the occasional razor blade showing up in our candy but candy being spiked with chemicals was rare.

In the nineties, as my son and daughter celebrated the season each year, costume decisions improved after the first fiasco to include Robin Hood and a court jester, a baby. a Power Ranger instead of Super Man and a nerd with a huge dictionary….not a computer… Though there was one Halloween, that costumes were trash bags since the rain was incessant for trick or treating. That didn’t stop us. We also decided that a carved pumpkin was not enough so the house was dressed with lovely rust and yellow floral arrangements and a yard filled with ghosts, signs, funny gravestones, and spider webs throughout.

Now, though there are no grandchildren, nothing has changed with the exception of less children knocking on the door on October 31st. Though the signs have become faded and the gravestones totter, new additions such as a family of scarecrows have been added, floral arrangements refurbished and my 20 plus daughter coming to spend a pre-Halloween weekend, carving the best pumpkin ever, while munching on roasted pumpkin seeds and home-made pumpkin bread.

Once a child, forever a child and another year of adding more pictures to that scrapbook or should I say, Facebook page instead.